Becoming pregnant again after a stillbirth is an incredibly daunting prospect for women and families, often characterised by the fear of repeating the experience. Women who have had a stillbirth are at increased risk of complications in subsequent pregnancies, including stillbirth, pre-eclampsia, placental abruption and low birthweight. It is also associated with increased psychological, emotional and social challenges.

The Rainbow Clinic, at Saint Mary’s Hospital, is a specialist service for women and their families during a subsequent pregnancy following a stillbirth or perinatal death. It cares for families from the time of the postnatal appointment onwards and into a subsequent pregnancy. It engages with women early, ensuring they are on the right treatment, making any necessary referrals and providing more detailed ultrasound scanning.

The additional tests and continuity of care, provided by a small team of specialist doctors and midwives, result in improved outcomes for the baby as well as improved psychological wellbeing for parent and better use of NHS resources. So far the Rainbow Clinic has cared for approximately 550 families.

A retrospective case control study that reviewed the clinical outcomes for women with a history of stillbirth found that clinical outcomes were improved following the establishment of Rainbow Clinic. There was a reduction in NICU admission (9% vs 14%) and subsequent stillbirth (0% vs 2%). For every £1 invested in Rainbow Clinic, £6 of value was derived for parents and staff. This included improved education for staff and reduced psychological morbidity for parents.

Health Innovation Manchester will support the scale-up across GM maternity units, aiming to reduce the rates of maternal deaths, stillbirths, neonatal deaths and brain injuries that occur during or soon after birth by 20% by 2020 and by 50% by 2030. The charity Tommy’s is also giving additional financial support as validation of the clinical progress to ensure scale and spread of the project. 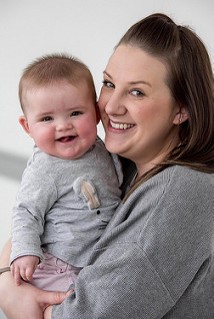 Victoria Ashcroft says she can’t thank Manchester’s Rainbow Clinic enough for helping her have the family she had always wanted. Victoria attended the Rainbow Clinic at Saint Mary’s in 2016 when she became pregnant again 12 weeks after her son Archie was tragically born still.

“When I found out that I was pregnant for the second time I was absolutely elated and
absolutely petrified at the same time. I lost my first baby at 37 weeks and initially we weren’t sure why. My pregnancy had been very low risk and he had grown well but we later discovered that I had a very small placenta and it had abrupted.”

Anxious about her second pregnancy, Victoria heard about the clinic and the specialist support they offer and knew that she wanted to attend as part of her care plan. Victoria travelled to Manchester’s Rainbow Clinic where she was offered specialist placenta scans, currently not available at her local hospital in Macclesfield, as well as emotional support for her and the rest of her family during her pregnancy.

“The staff at the Rainbow Clinic were also fantastic in offering emotional support during the second pregnancy. The anxiety never left me during my pregnancy but having an expert in placentas and stillbirths telling me that everything is OK is the best anyone can hope for. It doesn’t take that risk away, because every pregnancy has risk, but it reassures you that you’re going to get to take a healthy baby home.”

Victoria and her partner James were delighted when they welcomed a baby daughter, Ella, on 1 August 2017 following a healthy pregnancy.
“Ella was born at Macclesfield hospital by a very calm and planned C-section. We had amazing care from the team at the hospital and I want to credit them for how they supported us.”

“We have now just celebrated Ella’s first birthday. She is the most chilled-out, happy little soul, although she isn’t a fan of sleeping. I can’t thank the Rainbow Clinic enough for helping us have the family we wanted.”