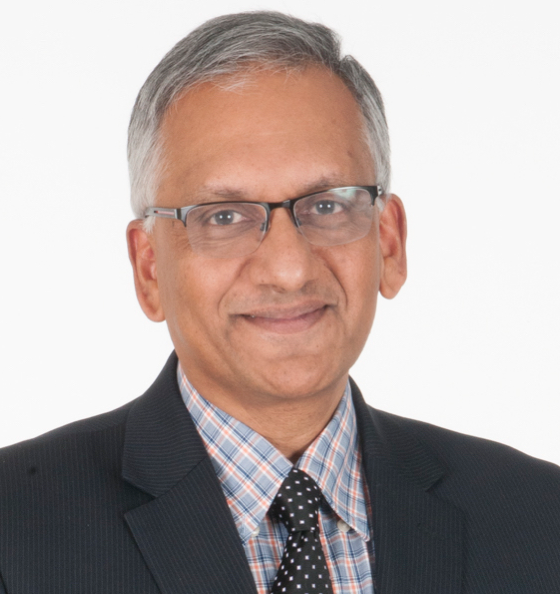 Mr Titus Augustine, Consultant Transplant, Endocrine and General Surgeon, was recently appointed as Manchester’s first Chair of Transplantation via the MAHSC Honorary Clinical Chair Scheme. Below he talks about his research career and how he hopes this new role will help further research in transplantation in Manchester

Tell me a bit about your career and background
I have taken a somewhat meandering and serendipitous route to my current position in Manchester. With roots in Kerala in South India, I studied at a missionary school in Sarawak, Borneo, before Medical School at the St. John’s National Institute of Health Sciences in Bangalore in India. After medical school, I worked for a missionary hospital in India in a Leprosy Eradication programme for two years before, returning to St John’s for a postgraduate residency in surgery.

Following on from my surgical residency, I joined the faculty of St.John’s for three years, before coming to the UK in 1992 where I worked at the Hammersmith in London and Sheffield for a couple of years before moving to the North West in 1994, starting off as a registrar at North Manchester General Hospital.

In 1996 I was moved at short notice to the Transplant Unit at Manchester Royal and developed a lasting interest in transplantation. In 1999, I spent a year at St. James’s in Leeds to gain experience in liver transplantation, before being appointed Consultant in Manchester in 2000. I also undertook a short sabbatical at the University of Minnesota to learn laparoscopic donor nephrectomy and pancreas transplantation soon after appointment.

My wife is a Radiologist and we have one daughter who is a Biomedical Engineer. While I consider myself a workaholic, outside work, my main interests are travelling and walking. My most memorable trip was a drive from Manchester to Gambia across the Western Sahara for charity.

How did you first get involved in medical research?
During my initial consultant years I was primarily focused on developing new clinical services in the department, namely Solid Pancreas Transplantation, Laparoscopic Donor Nephrectomy and the Encapsulating Peritoneal Sclerosis Surgical Service. These are now well established services at MFT. I was also peripherally involved with clinical trials and research during these years.

However, a chance discussion over coffee with an academic colleague and friend, Professor Rayaz Malik, led to a collaborative study, utilising corneal confocal microscopy to evaluate nerve regeneration after pancreas transplantation. The study was funded by an NIHR grant of over $1million. This collaboration kindled my interest in research and the potential research opportunities that exist in busy clinical departments, which can be harnessed for patient and academic benefit.

With the potential for developing a strong research portfolio, two middle grade posts in the department were converted to full research posts with nominal clinical involvement. This has allowed transplant surgical trainees to take on full time research projects leading to a higher degree. This has generated four PhDs including a prestigious MRC funded project allied to beta cell replacement, which the department offers. We are in the process of advertising two further posts commencing in September 2018.

What are the areas of research you are interested in?
While I find several aspects of transplant research interesting, I have three main current areas of interest:

Is there a certain trial or study that you are most proud of?
I am perhaps most proud of the “Laparosphere”. It is a conceptual instrument, for Laparoscopic Surgery, which I designed over ten years ago.

The proposal reached the final stages of Wellcome Trust Health Innovation Grant, but was considered too conceptual at that stage. However with support from TRUSTECH, MFT and from the Engineering and Physical Sciences Research Council UK, and grants totalling around £200,000, it led to an engineering PhD project in collaboration with TRUSTECH and Sheffield Hallam University. We were also able to secure a patent and develop some early prototypes.

It is currently at a point where it requires a combination of further funding, identification of a suitable material and prototyping technology.

The whole process for me has been an interesting intellectual journey, combining clinical work with research and technological advances for patient benefit. As part of the development of the laparosphere, we conducted a study using electronic sensors to measure organ retraction pressures during surgery, and postulated that retractors with embedded sensors could accurately quantify retraction pressures and avoid retraction injuries.

It is also an opportunity to reflect on my mentors, who developed and nurtured the department and who trained me and supported my overall development. It is also a moment to acknowledge every member of the large complex team which delivers the successful transplant service and the excellence. I have a real sense of pride to lead such a team which is exemplary of the service the NHS provides.

To work in an intense speciality as transplantation with unsociable hours, you require strong family support and without my wife and daughter’s unstinting support for my professional advancement, this would not have been possible. There is a slight tinge of sadness as my father who was a teacher (he in fact was my English teacher in school) and another great source of strength passed away four months ago. He would have been incredibly proud, as also my mother who had passed on earlier.

How will this new role support transplantation in Manchester?
It is my aspiration that in this new role, I can contribute significantly towards supporting the developing research profile of the department, through facilitating collaborations and links. In the last three years there has been a surge in research activity in the department, primarily allied to the clinical services the department offers.

Manchester has become the busiest clinical islet transplant centre in the UK and is becoming internationally recognised for beta cell therapy research. There are significant opportunities to build on these developments and become a world leader in beta cell replacement therapy.

Personally, I hope to be able to provide senior mentorship to younger members of staff with research interests and also develop new research themes for patient benefit aligned to the creation of Manchester University NHS Foundation Trust and the overall transformation of services in Manchester.

What are your future goals for transplantation?
Manchester is the largest kidney transplant department in the UK, having done over 6,500 transplants in the last 50 years. The department has a wealth of clinical experience, clinical material and data. While the department performs very well nationally in transplant numbers, clinical metrics and outcomes, research over the years has not kept pace with clinical activity and potential opportunities.

It is my hope that transplantation in Manchester addresses this imbalance and develops into a department which is recognised nationally and globally for both clinical and research excellence. My goal is to develop a strategy which utilises all the resources which MFT and MAHSC has to offer in the pursuit of these ambitio