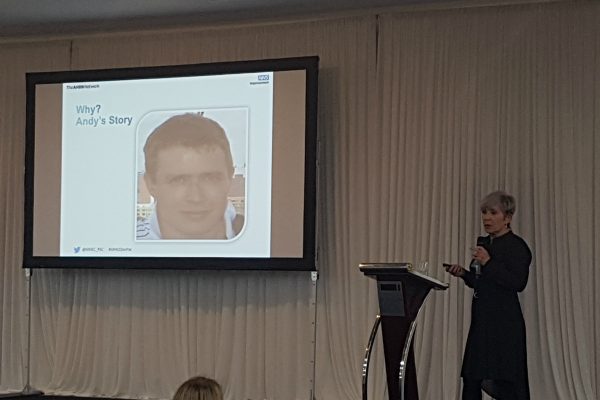 The event focused on the improvements made to the NEWS 1 system that ultimately led to the development of NEWS 2, including how oxygen saturation and delirium is accounted for in the new scoring system.

The event opened with a message from Health Innovation Manchester’s Chief Executive, Professor Ben Bridgewater, looking at feedback from the first event and the ‘You said, we did’ approach to making the second event as thorough and as useful as possible for delegates.

Eva Bedford, Clinical lead for the PSC Deteriorating Patient workstream then told a powerful patient story about Andy – a fit and well 35 year old who suffered an acute cardiovascular event whilst out walking, and whose life was saved by both a passer-by who alerted the emergency services, and the timely, appropriate care pathway taken by the healthcare professionals who treated him. The story was especially poignant as Andy is Eva’s son.

The first keynote speaker was Dr Ronan O’Driscoll, Respiratory Physician at Salford Royal, who shared his insight into how high levels of oxygen saturation are now accounted for in NEWS 2 in circumstances where this can actually be dangerous, for example when treating patients with COPD.

He was followed by Dr Emma Vardy, Consultant Geriatrician at Salford Royal, who spoke about the assessment of acute confusion/delirium in early warning scoring systems. She followed this with a group activity that looked at systems of initial assessment for delirium, including SQiD and 4AT.

Delegates also heard from Bolton NHS FT about their own journey implementing NEWS 2, as well as “the data lady” Katy Cheema, Associate Director of Transformation Analytics at NHS South, Central and West, who encouraged delegates to tap into their “inner geeks” to bring Greater Manchester and Eastern Cheshire closer to the joy of measurement, while highlighting the importance of measurement in QI projects.

The day was rounded off with a dynamic whole-group activity, brought to us by the organisation ‘Collaborate Out Loud’, who design and create social spaces for innovation to flourish. This workshop was designed to get people out of their comfort zones (and their seats) to encourage ‘extreme collaboration’ and challenge traditional thinking.

Kate Cheema, Associate Director of Transformation Analytics at NHS South, Central and West, provides a helpful, step by step improvement guide and resource that can be shared with colleagues.

he film introduces why the National Early Warning Score (NEWS2) was developed; how it can be used to identify acute deterioration, including sepsis, and the benefits of a standardised early warning system.