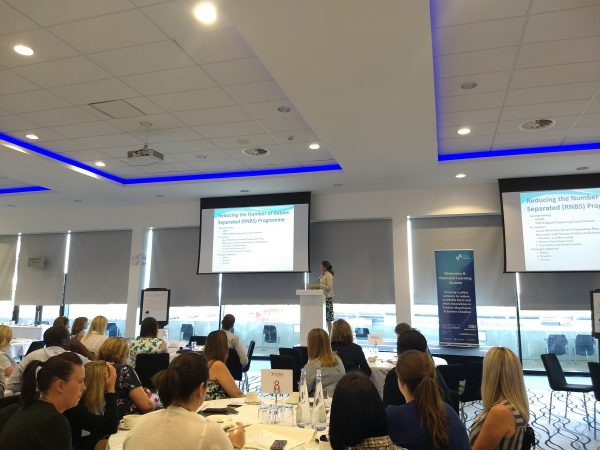 The experience of women, babies and families was central to the second Greater Manchester and Eastern Cheshire Maternity and Neonatal Learning System event.

GMEC PSC hosted the event at the AJ Bell Stadium, Barton-upon-Irwell, with delegates from organisations across Greater Manchester and Eastern Cheshire attending on 3 July.

Building on the Maternity and Neonatal launch session earlier this year, where attendees expressed a desire to focus on one or two key topics, the second event explored the case for PReCePT, Preventing Cerebral Palsy in Preterm Labour.

PReCePT is an evidence-based, cost-effective project which been designed to help reduce cerebral palsy in babies through the increased antenatal administration of magnesium sulphate (MgSO4) to mothers during preterm labour, at a cost of £1 per individual dose.

Cerebral Palsy costs an average of £800,000 per individual over a lifetime, with quantifiable costs to the individual and their families.

Dr Karen Luyt, National Clinical Lead PReCePT and Consultant Senior Lecturer Neonatal Medicine, UH Bristol NHS Trust and University of Bristol, explained that for every 42 mothers who receive treatment, one case of cerebral palsy is prevented. A few hundred cases of Cerebral Palsy may be prevented in England if PReCePT was fully implemented in line with NICE guidance.

Attendees were able to ask Dr Luyt questions about PReCePT and how their organisations could work towards improving their compliance with NICE Guidance and in the long term reduce the incidence of cerebral palsy in babies born preterm.

Kirsten Mitchell, founder of Spoons, a Greater Manchester charity supporting families in neonatal intensive care, also shared her own personal story “The tale of three babies” and her experiences with her son Tom, who was born at 24 weeks and spent almost five months in neonatal care.

She said: “My first two experiences of being a mum were pretty standard with no major problems but my experience with Tom impacted on everything.

In the final session, Eve Holt of ‘Collaborate Out Loud’ shared how they are innovatively embracing and harnessing the energy and magic of difference and the crowd, to create surprising, simple and social shared spaces between formal structures and informal networks to help ‘get stuff done together’.

“We have listened to attendees to our first event and ensured we have acted on their suggestions, including ensuring women, babies and families are central to the day and focusing on PReCePT, which we identified as being an area for learning and development in Greater Manchester and Eastern Cheshire.

“The atmosphere during the learning activities was incredible with a real buzz of collaboration while our speakers provided thought-provoking, engaging and varied presentations.

“We would like to thank everyone who attended and presented during the event. We look forward to sharing innovations, collaborating across the system and supporting those working to improve patient safety within Greater Manchester and Eastern Cheshire.”