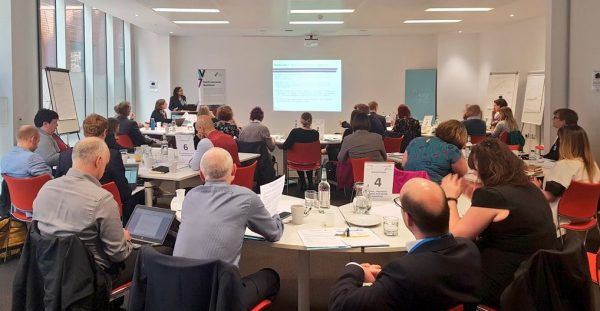 Health and care leaders from Greater Manchester have formed a pioneering partnership with the pharmaceutical industry to improve the care and treatment of people with dementia.

The news comes during the Alzheimer’s Society’s national dementia action week, which is raising awareness of the disease.

Leaders from Health Innovation Manchester and Greater Manchester Health and Social Care Partnership have signed a partnership agreement with the Dementia Industry Group, which is made up of representatives from the UK’s pharma industry and Alzheimer’s Research UK. It is thought to be the first partnership of its kind in the UK.

It is estimated that there are currently more than 30,000 people living with dementia in Greater Manchester and the city region spends £270 million a year treating and caring for people with the disease.

People with dementia suffer with continued decline in how the brain functions and are likely to experience a range of symptoms including memory loss, difficulty carrying out daily tasks, changeable moods and unpredictable behaviour.

Greater Manchester has pledged to become the best place to live with dementia in the world as part of its Dementia United strategy. This new partnership with industry will focus on finding the best care and treatment options for people with dementia, as well as identifying people who are at risk of developing the disease. It will involve looking at developing new medications and ensuring medication is prescribed correctly, as well as exploring how new technologies and digital innovations can improve people’s quality of life.

Prof Ben Bridgewater, Chief Executive of Health Innovation Manchester, commented: “With an ageing population and rising numbers of people being diagnosed with dementia, it is one of the greatest health challenges facing the country and Greater Manchester. Living with the disease can be incredibly distressing for the individual and their family or carers, so it is crucial that we find ways of providing better care and treatment. By combining our health and care resources with the pharma industry, we will have the best chance tackling dementia and preventing more people from developing the disease in the future.”

The Dementia Industry Group will focus on areas such as involving people with dementia in studies, using scientific approaches to identify people who might develop dementia and using IT systems to help detect and treat the disease.

Harry Brady, Chair of the Dementia Industry Group and Director, Policy and Communications, for pharmaceutical company MSD, said: “Our understanding of the science behind dementia is evolving, pointing to new ways of detecting and treating dementia that might be able to change the course of the disease in the future. We are proud to be partnering with Health Innovation Manchester and the Greater Manchester network to maximise the impact of current and future medicines on the lives of patients and their families. Greater Manchester is ideally placed to take these ambitions forward thanks to its uniquely devolved health and care system, strong digital assets and research capability.”

To find out more about the signs and symptoms of dementia visit www.nhs.uk or speak to your GP.